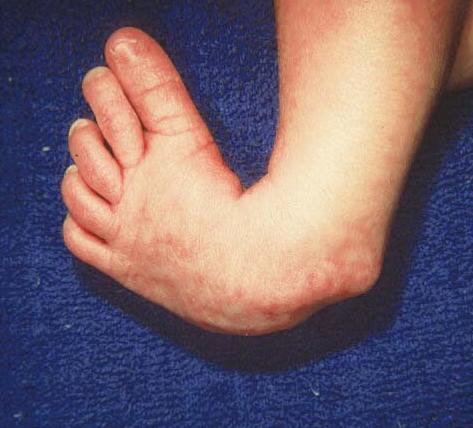 I.      Definition:  Clubfoot and metatarsus adductus are congenital conditions of the foot that are usually apparent at birth.  In both conditions, the foot is turned inward and is often described as kidney-shaped.  The ligaments and tendons in the foot are abnormally tight, causing stiffness and lack of normal motion in the foot.
The medical term for clubfoot is “talipes equinovarus.”   In this condition, the sole of the affected foot is turned such that it faces the other foot.  Both the forefoot and the heel are curved inward.

II.      Cause:   The causes of these congenital conditions are unknown.  It is believed that clubfoot is a genetic abnormality in which the foot development is disrupted before birth.  Metatarsus adductus is believed to be caused when the child is tighly packed in the mother’s womb.

III.      Treatment and Prevention:  Your pediatrician should identify a clubfoot at birth and notify an orthopaedic specialist within the first 1-2 days after birth.  Clubfoot is usually treated with a series of corrective casts designed to stretch the foot into a corrected position.  These casts are usually applied early in life (the earlier the better), and replaced frequently as the infant grows.  The casts may be followed by a brace that is taped to the feet and worn daily.  If surgery is required, it involves releasing the stiff and misaligned joints, loosening the tight tendons, and moving the bones into a more normal position.  Most infants with metaratsus adductus eventually develop normally without treatment.  If the forefoot remains twisted after the infant is 2 months of age, you should see an orthopaedic specialist for treatment.  If the foot is flexible, it can be easily corrected with stretching.  If the foot is inflexible, corrective casts or a nighttime brace may be recommended.  Surgery is almost never required to treat metatarsus adductus.